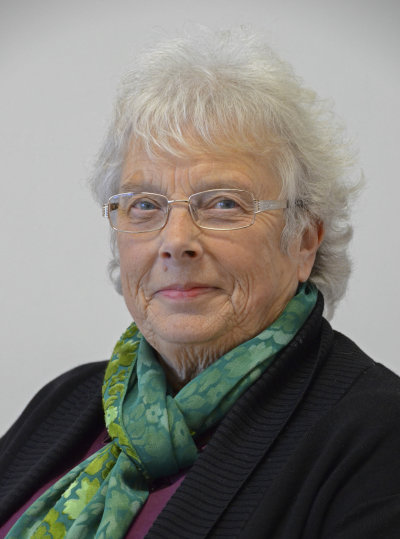 She was born in 1941 and lived her early years with her maternal grandparents whilst her father was serving in India. On his return from war time service, the family moved to Sussex where she went to a variety of primary schools before finally passing the now largely defunct 11+ and attending Worthing High School for girls.

She claims to have been born reading! Never without a book in her hand she frequently landed in trouble for reading with a torch under the bedclothes, but due to the number and variety of primary schools she attended, her ability to count beyond the extent of her fingers and toes is severely limited!

She became a teacher, training at Salisbury training college, and ultimately a B.Ed., from Plymouth University which led to a variety of teaching posts before marrying and moving to Cornwall where she and her husband had purchased a small hotel. With two young boys, baby twin girls and a hefty mortgage she returned to teaching at the local comprehensive school to finance the hotel, and remained in that post for twenty years! The family relocated to Dorset after early retirement and the writing began in earnest.

Her interest in Medieval Sherborne began after a visit to Sherborne Abbey carol service sparked her imagination. A year of research followed....Sherborne has an incredibly rich history which is a gift for the imagination....and Matthias Barton was born. He then sat in a drawer for seventeen years while she returned to teaching.....this time in a school for children with autism.....and then more seriously, to support and care for her husband who had Parkinson’s disease with Lewey Body dementia. After his death, the children all now grown and flown, she took Matthias Barton out of the drawer and decided to give writing in the genre her full attention.
Next
Previous